LaserWeb is a free software that allows to control printers, engravers and laser cutters since it supports different firmwares: Grbl, Marlin, Smoothieware and LasaurGrbl. Currently the latest version of this tool is version 3 and is in the project’s GitHub repository (https://github.com/LaserWeb/LaserWeb3). Laser Web is based on Node.js and is supported by most platforms: Windows, Linux, Mac, Raspberry Pi and Vagrant.

First, the hardware of the machine is slightly modified. Specifically you have to change the Jumper that incorporates, as it is seen in the following image, so that in S we have V0.9.

To install the software on a computer with Windows operating system requires the Google Chrome browser and the following steps must be performed. 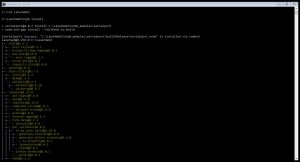 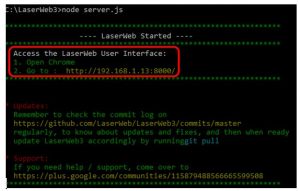 We have finished configuring the software by entering the settings tab Settings and defining the size and GCode parameters required depending on the laser recorder to use.

On the other hand, we configure the pre/post commands and GCode control. Specifically, it is necessary to indicate the maximum speed measured in revolutions per minute (RPM) for the maximum value of PWM, the Homing sequence that is sent by clicking on the buttons of the software and the speed of movement or advance G0. For our equipment we must set the following parameters GCode: the parameter PWM Max S value in Grbl is programmed at 1000 RPM which indicates that the PWM output does not exceed 5 V. The Homing Sequence to G28 and Travel moves to 30 mm / s. Optionally we indicate that the start Gcode command is the G28 and end the M30 as well as the commands pre and post G1 (command of movement) are M3 (laser ignition) and M5 (laser shutdown) respectively. In addition, a laser power 1 S and a burn duration of 10 ms have been defined by default.

To save configuration changes, refresh the page. To avoid writing all parameters every time the program is used, it is possible to save a configuration profile with the extension .json by going to Settings / Backup / Backup Settings.

Sometimes a message may appear in the software itself asking to enable the option of Google Chrome «Ignore the software render list». This is done by putting in the URL chorme: // flags and allows the machine and the software to communicate correctly.

This software includes an extra security option «Laser control PIN», which allows us to enter a 4-digit PIN to unlock the laser control. With this option we will be sure that the laser will not be activated by mistake unless we first enter the PIN.

The menu of this software is more advanced and includes the following options: